Seven Towers Publishing Invites you to the launch of 100 Years Later The Legacy of the  1913 lockout, Edited by Mary Muldowney with Ida Milne. Venue: the Teachers’ Club, Parnell Square on Thursday, 14 November at 6 p.m. 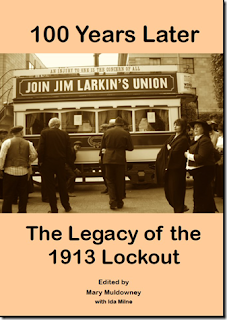 It is now one hundred years since the 1913 Dublin Lockout and the trade unions that the Dublin Employers Federation tried to smash are still alive and kicking. The descendants of many of the participants have passed down stories through their families, communities and trade unions about the hardship and the heroism that was part of that epic struggle.

The 1913 Alternative Visions Oral History Group came together in 2012 to start collecting those stories so that the memories of how ordinary people fought for the right to belong to the trade union of their choice can be saved for future generations.