"Collier was then a dauntless and powerful man, exhibiting all the marks of great muscular powers; and though it was evident his best days had passed away, he yet seemed like an oak that braved the storm and stood the shock of time, defiant as ever. He was upwards of six feet high and nearly fourteen stone weight, extremely broad in shoulders and made proportionately". With these words a Drogheda solicitor described the famous highwayman, then in the last year of his life and almost seventy years of age.


There are conflicting reports as to where Michael Collier was born, some say he was a Bellewstown man, others say it was at the foot of a hill on the banks of the river Nanny, but there is strong evidence to support the fact he was from Lisdornan, Julianstown, Co. Meath. Born in the 1780's, the area where he grew up formed part of the old coach route from Drogheda to Dublin via Beamore, Cooperhill, Dardistown, Lisdornan, Mullaghteeling, Naul, Ballyboughal, St. Margarets and finally Church St. in Dublin. Collier would have seen much activity along this route and heard many stories and tales as the horsemen would regularly pull up at the numerous forges that lay on the route; and perhaps he may have travelled to the city and back with many of the riders and coaches.

Whilst still a young teenager he went to work in the vicinity of Pilltown, just outside Drogheda for a man named Murtagh, and whilst he was in this employment he was involved in antics such as robbing fruit from the nearby orchards; a pretty serious offence in the 1790's. In his youth he also fell in love with a girl whose father and three brothers were horse-thieves. They had been captured and were on their way to Trim for what was considered then a hanging offence. He engineered their escape, which made him a wanted man. He took to the hills and to the highways, and very soon established himself as a very skillful highway robber, and from the handsome booty he obtained from his activities, enabled him to live like a prince. What is to his credit is that he acted like a prince, priding himself in his unique code of conduct and helping in a practical way many less fortunate in his native countryside.

Some of his most famous exploits included: during one of his first robberies near the Naul, Collier and his accomplices held up the Dublin mail coach. The coach was stopped and a voice cried out "Deliver to Collier!" The ladies on the coach began to panic but Collier reassured them that they would come to no harm as long as they handed over all their money. He generously allowed them to keep their jewellery. 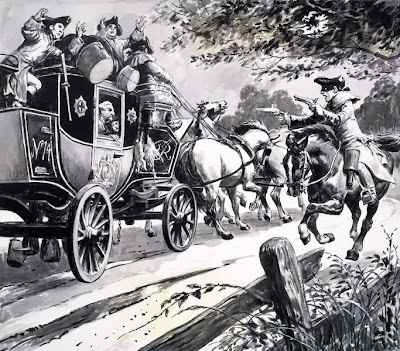 Another famous scene was his hold-up and robbery of the Dublin-Belfast mail coach at Bloody-Hollow on the Great North road between Drumcondra and Swords. He collected a lot of coats and hats and arranged them on a hedge at the side of the steep-rising out of Bloody-Hollow. As the stagecoach was nearing, Collier leaped out in front of it and shouted "now gentlemen, resistance is useless, my men line the ditches, they only want one word from me and they will riddle you with bullets". The frightened passengers could do nothing except deliver up all their money and valuable items to the highwayman. When they did Collier stepped aside and bid them a safe journey. The next morning a flying squad of Dragoons sent out from Dublin found six dummy figures propped up against a hedge at Bloody-Hollow. By that time, Collier was safe and sound many miles away from that spot.

Collier became hated by the well-off members of society, whilst the poorer classes to whom he was alleged to be generous had great respect for him. Many a poor peasant or small farmer had reason to be thankful to him, as he shared some of the money he had taken from the rich landlords with them.

Of those who rode with him, many were from the village of Lisdornan and his gang numbered twenty-four at one point. Fourteen of his fellow highwaymen were hanged, six were shot and two were transported, yet he himself seemed to live a charmed life and escaped the hangman twice. The first time he was captured by Lord Gormanston and his Troopers at the old Greenhills Tavern, a few hundred yards south of the entrance to the Mosney Road. He was sentenced to be hanged, but broke out of Trim Jail on the eve of his execution and managed to escape by swimming the River Boyne to freedom.

The second time he was taken by John Armstrong (Chief of the Watch in Drogheda) and a large force of mounted constabulary at the Cock Pub in Gormanston. He was condemned to life imprisonment in the penal colonies of Australia. Soon after his arrival there, he was mysteriously released on condition that he joined the colonial regiment there. Sometime after that, he was promoted then discharged and given a free passage back to Ireland. He returned around 1820 and spent some time as a publican before his death. The great Leinster highwayman breathed his last in the house of Mr. Edward O'Reilly of West St. in 1849 of the dreaded cholera that was sweeping the country at this period. His remains were then brought, by means of a pony and cart, by six men to be buried in the Cord Cemetery by candlelight in the dead of night. His grave has never been fully identified in the Cord although the spot is said to be marked by a simple stone; a quiet end for the notorious highwayman.


Article extracts from "From the Nanny to the Boyne - A Local History" compiled by Margaret Downey & the Meath East Co-Operative Society.