With all this beautiful weather we've been having lately, when you're working indoors your thoughts naturally turn to being outside; namely out to the beach. The beach walk at Mornington is a lovely spot for a walk or run and is overlooked by the two structures known as The Maiden Tower and The Lady's Finger. The history of the two is long and, like any good historical building, comes with local myth and folklore attached.

The 60 foot high Maiden Tower was built during the reign of Queen Elizabeth I (some would say hence the name 'Maiden Tower') as a beacon to aid mariners on their way into Drogheda port. It was used as a landmark to mark the mouth of the Boyne and it is said that before the river walls were constructed in 1765, when a mariner brought his ship into line with the Tower and the Lady's Finger, the course of his ship marked the precise angle necessary to cross the bar. It also served as a look-out post during the Elizabethan Wars with Spain (1585-1603) to warn of any approaching enemy ships. The tower, the top of which is reached by spiral steps, commands a most extensive look-out over land and sea. It was originally brightly coloured, making it even more conspicuous and useful to mariners.

The nearby Lady's Finger is a 13 meter-high solid obelisk-like tower which is believed to have been constructed much later than its companion, and was also used as a shipping beacon in past times. In between the two there also sits the Victorian Lifeboat station which closed in 1926 and is now a private dwelling.

Local legend has naturally grown up around the two buildings, adding to their history. The story goes that a young and very beautiful  local woman had a lover who left to fight in a war overseas. Before he left, he told his sweetheart that he would return to her; if he survived it was on a ship with white sails, if he was killed his ship would return without him with black sails hoisted. Each day, for weeks the woman kept her constant and lonely vigil from the top of the tower for her lover to return. Months afterwards she spotted his ship on the horizon. Straining her vision to see the colour of the sails as the vessel came closer, it became clear to her that the sails were black. Overcome with grief she is said to have thrown herself off the top of the tower to her death. An obelisk was erected nearby in her memory which became known as "The Lady's Finger" , reputedly because it represents the tragic young woman's finger bereft of her hoped-for wedding ring. 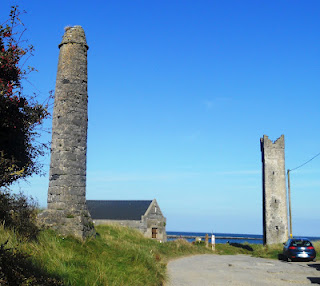 There is one more local story associated with the Tower which is described by James Garry:
"On a Spring morning in 1819 the fishing community of the little village were surprised to see smoke rising from the top of the tower and some of the more bold folk volunteered to investigate the cause. On reaching the top platform they found an old woman preparing a simple meal over a driftwood fire. Exposed to the elements, the stranger had arranged a rough bed of bent grass and assembled a few pieces of humble furniture and a spinning wheel. On being questioned she revealed that she had been told in a vision to seek out the tower and make her abode there. The village folk helped to make the tower as comfortable as possible and stretched an old sail from wall to wall to keep out wind and rain. Small quantities of bread and milk were delivered daily to the hermit who was regarded locally as a "Holy " woman. Spending her days in prayer, contemplating and spinning her wheel, the stranger attended mass in Mornington Church and each Sunday left the fruits of her weeks spinning on the alter steps. 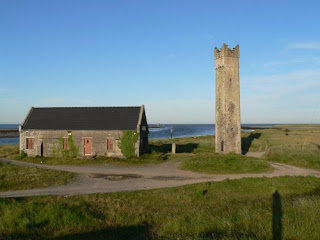 By the summer The Lady of the Tower, as she was called, had become something of an institution, attracting the attention not only of inhabitants of Drogheda but of the curious minded of Dublin. The visits of the ladies were never resented, but gentlemen were not allowed further than the bottom of the spiral stairs. Few visitors departed without leaving some monetary token of their sympathy and consequently the necessities of life were fairly well supplied. With the passing of the Summer and Autumn, food and fuel became scarce and the stream of visitors practically dried up. A local landowner came to the rescue and saw that essential needs were met. A very severe winter forced the hermit to vacate her lofty lodging and seek admission to a medical institution. She died there soon afterwards and was buried in an  unmarked pauper's grave. Who she was, what her background was and where she came from will always remain an intriguing unsolved mystery."

The Maiden Tower is unfortunately closed to the public but if you get a chance, go out and have a look. It's a beautiful spot especially in the sunshine.