5 History-Changing Events that Happened in Drogheda

Drogheda has, perhaps surprisingly, been in the middle of a lot of important Irish events. Some may be very well known (Cromwell's Siege, the Battle of the Boyne come to mind) but there are less well-known happenings that had a huge effect, not only on Drogheda's history, but Irish history as a whole.

Here's your quick guide as to why Drogheda is more important than you think:

1. Poynings Law
Possibly one of the most important historical events to affect Irish history, this law, introduced by the then Lord Deputy of Ireland Sir Edward Poynings in the Irish Parliament sitting at Drogheda in 1494, was an attempt to bring the rebellious Irish back under the yoke of the Tudor Monarchy soon after the English War of the Roses. In it it stated that no Irish Parliament could meet without the permission of the King of England and no legislation could be passed or any parliamentary business done without first running it by the King's Deputy & Council in Ireland. It succeeded in restricting Irish affairs for the next 300 years and wasn't repealed until Henry Grattan's Parliament in 1782. 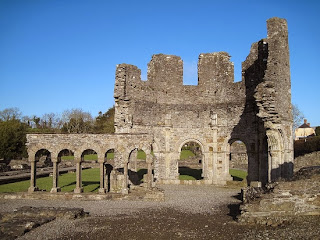 One of the many meetings of Irish bishops, but one of the most important, occurred in 1152 at Mellifont Abbey. It was basically to decide a whole reshuffle or redefinition of the Irish Church as it stood then; they increased the number of bishops and importantly redefined the number and size of the dioceses. This was when Drogheda was divided into the two dioceses as it still stands today; the diocese of Armagh on the northern side of the town and the diocese of Meath on the Southern side with the Boyne being the dividing line. This had the knock-on effect of Drogheda itself being founded as two separate towns initially in 1186 - one for each diocese, Drogheda-in-Meath & Drogheda-in-Louth - until their eventual unification in 1412.

So not only did the Synod redefine Ireland it also defined Drogheda itself.

3. King Richard II receives the submission of the Irish chiefs
In 1394 King Richard II came to Ireland with the intention of dealing with the problem of the native Irish; namely from the self-styled King of Leinster Art McMurrough. Richard's initial plan was to forge a military campaign against the Irish but their guerrilla tactics constantly had the English on the back foot. Many Irish lords and chiefs decided to submit to the king, possibly in order that he would then stay in the Pale and leave them alone to deal with their own lands instead of marching across Ireland interfering, as it were.

Richard II came to the Dominican Priory at Sundays Gate in March 1394 to accept the submission of the notable chiefs of Ulster, including the O'Neills, the O'Donnells and the O'Hanlons. This gesture in turn caused Richard to try the diplomacy tactic with McMurrough who did indeed take the deal offered, of a full pardon for past actions, a royal pension and swathes of land in Kildare and any others he could take off other rebel Irish. Unfortunately the truce didn't last and the Irish were back fighting the English in Ireland before King Richard had even left.

4.Battle of the Boyne
There have been many histories written about the battle, its origins and tactics and aftermath. It has often been said that the Battle of the Boyne was fought in Ireland but it wasn't an Irish battle. To an extant, this is true; what was at stake was the throne of England, fought over by William of Orange and James Stuart. It was also an international battle; the Dutch William wanted England so he could enter into an alliance against France. Religion of course came into the mix; with the Catholic James Stuart on the throne, Catholics would once again be able to hold public office, and regain their lands and livelihoods lost under Cromwell. Protestants naturally fought for the Protestant William, also fearful that a Catholic monarch would mean their removal from high society and their massacre and eviction from Ireland.

William did indeed win the day to become King William III of England whilst James II fled back to France. The political and historical landscape had once again changed.

5.Treaty of Mellifont.
The Treaty of Mellifont in 1603 brought to an end the 'Nine Years War' in Ireland, a series of skirmishes between Gaelic Chiefs (namely the Earl of Tyrone Hugh O'Neill) and Queen Elizabeth I. O'Neill, deflated by the loss at the Battle of Kinsale, agreed to meet the Lord Deputy of Ireland, Lord Mountjoy at Mellifont to sue for peace and to parley for pardon for his acts of high treason. Mountjoy made him beg for mercy on his knees and left him in that pose for an hour until Mountjoy would allow him into his presence. O'Neill was granted his pardon & his past transgressions forgiven, although Lord Mountjoy neglected to tell O'Neill that although he was surrendering to the Queen, she had in fact died 4 days beforehand.

The aftermath of the Treaty led to the 'Flight of the Earls' in 1607 to Spain and saw the end of the great Gaelic nobility.

Famine Emigration: Drogheda was the second largest port of departure for people emigrating due to the Famine of 1845-52. In 1847 alone over 70,000 people left Ireland through Drogheda Port, mainly bound for Liverpool to seek a new life.
Email ThisBlogThis!Share to TwitterShare to FacebookShare to Pinterest
Labels: Battle of the Boyne, Drogheda, Drogheda history, Poynings Law