Drogheda has had it's fair share of gruesome and bloody happenings over the centuries so here's a quick look over some of it's more noticeable incidents:

(Just a reminder this list is subjective so if you disagree with some of the entries please add your own in the comments!) 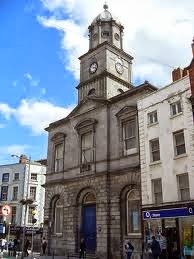 Whilst the Tholsel is historically known as housing the Corporation Chambers, the Assizes, and the County Courts for one hundred and twenty years, and being the focal point for public meetings and public auctions, it has also witnessed it's fair share of public executions.

Towards the end of the eighteenth century the public gallows was erected at the bottom of Peter Street opposite the Tholsel and was in use up to c.1800. Many local United Irishmen were hung there in retaliation for the 1798 rebellion. One famous case was the execution of a highwayman, James Flinn, one of a gang led by the famous Collier the Robber. Flinn was captured during a highway robbery near Deepforde Bridge (now near the current entrance to Stameen housing estate on the Dublin Road). He was tried, found guilty and hung at the Tholsel in 1795. Unluckily for Flinn it was his first time "on the road" proving that crime does indeed not pay.


These gruesome tombstones can be found in Stamullen, at Beaulieu House and the most well-known, in St.Peter's Church of Ireland churchyard, Peter St. Unlike the normal carved tombstone, in the case of these cadaver (from the Latin word for corpse) stones the body is presented in a decomposed state, generally wrapped in a funerary shroud. During the 14th and 15th century when these stones were constructed, a series of plagues swept across Ireland from the continent, and people became obsessed with death and the transience of life.

The stone at Beaulieu House is perhaps the most well preserved of the three in the area, and admittedly the most grotesque. Snakes and worms hang out of the ears & twine around ribs and legs. Toads cling onto the chest and a creature with bat-like wings hangs on to the right leg, while all sorts of maggots, horned lizards and toads with pointed snouts nestle in the folds of the shroud. Nothing about your own mortality is left to the imagination.


Tudor Drogheda was the site of many Irish Parliaments, an indication of it's status, and was also not free from the political machinations to be found across the water in England. In 1467 two of the most powerful men in Ireland at the time, Thomas Fitzgerald, 7th Earl of Desmond, & his brother-in-law, Thomas Fitzgerald, 7th Earl of Kildare, were accused by their political enemies of of being in league with the Gaelic Irish against King Henry VIII. The charges of treason and extortion meant their lands, titles, and finances were confiscated.

They were both summoned to answer the charges at the Parliament in Drogheda, which the Earl of Desmond duly did. As soon as he did he was taken to Gallows Lane (stretching from Hardman's Gardens to the Windmill Road) and beheaded. John D'Alton, in his 1844 History of Drogheda sets the scene: "Under these charges the Earl was found guilty, and beheaded on the 15th Febuary, 1467; the melancholy scene took place, according to tradition, on the north commons of Drogheda, where the old gallows was formerly erected...His head was sent to Dublin to be spiked on the wall of the castle, and his body was interred in the Dominican Friary..."

His brother-in-law the Earl of Kildare managed to dodge this trial where he probably would have received the same fate, and escaped to England where he pleaded his case before the King and was pardoned.


4. The Head of St. Oliver Plunkett

St. Peter's Church on West St. holds the shrine of St. Oliver Plunkett, who was martyred at Tyburn, England in 1681, the last Roman Catholic martyr to die in England.


Plunkett was Archbishop of Armagh and Primate of All Ireland at the time of his death, and was recognized as the last victim of "The Popish Plot", a conspiracy theory which imagined an extensive Roman Catholic conspiracy to assassinate King Charles II. Oliver Plunkett was highly regarded in his office as Archbishop and was praised for his reforms of the damaged Roman Catholic Church after the ravages of Cromwell. His message was one of peace, reconciliation and forgiveness, a ideology he stood by until his death. He established a Jesuit College in Drogheda in 1670; over a year later of the 150 students, 40 were Protestant, making this college the first integrated school in Ireland.

Due to the large Anti-Roman Catholic feeling prevalent at the time and the hysteria of "The Popish Plot", Plunkett (being a prominent figure in the Church) was accused of treason. He was tried twice, once in Ireland where it was deemed he would get off scott free, and so again in London. The second trial is generally regarded as a serious miscarriage of justice, and despite pleas for mercy for Plunkett and many people convinced of his innocence he was found guilty and condemned to be hung, drawn and quartered, the punishment for treason.

After his execution his head was thrown onto the prepared fire nearby but was rescued by his friends. The Relic of the Head was brought to Rome and other places before ending up in the care of the Dominican Nuns in the Siena Convent, Drogheda c.1725. The Relic was transferred to St. Peter's Church, West St. in 1921 where it has remained since. 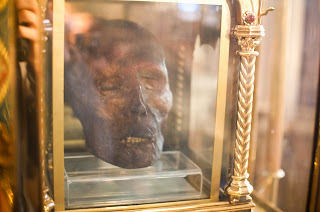 For some people the Relic is an important Roman Catholic artifact to be venerated, for others it's a source of morbid curiosity; it is, after all, a preserved human head in a glass box that people come and look at. However, the ideals and beliefs of St. Oliver Plunkett, of peace, tolerance and forgiveness, should serve as examples to people of all faith.

Cromwell's siege of Drogheda in 1649 is well documented and was effectively an act of war against the Royalists based in Ireland. Cromwell's Parliamentarians wanted to finish the job of quashing the Royalists and more ominously, to get revenge for the persecution of Ulster Protestants. Like all wars, atrocities were committed, towards soldiers and citizens alike, sanctioned or not by the Parliamentarian high command.


Reports of what actually happened in the town during the attack are difficult to confirm as both sides may have exaggerated in their reports of the siege. There were, by Cromwell's own account 3,500 dead afterwards; of whom 2,800 were soldiers which leaves an estimate of 7-800 civilian casualties. However there are a number of well documented incidents, by outside observers and Cromwell himself, that illustrate the bloodiness of the battle.

Drogheda's garrison was led by Sir Arthur Aston, who due to a riding accident years previously had lost part of a leg and had a wooden one fitted. After the Parliamentarians breached the town walls, Aston and his remaining garrison fled up to Millmount where they were finally captured by Cromwell's soldiers. Any Royalist soldiers found in the town, including the men in Millmount, were put to the sword as Aston had refused to surrender to Cromwell and so gave up his chance to spare his own, and his men's, lives. Aston himself was dealt the grisly fate of being beaten to death with his own wooden leg, as Cromwell's soldiers heard a rumour it contained gold, and then was hacked to pieces. 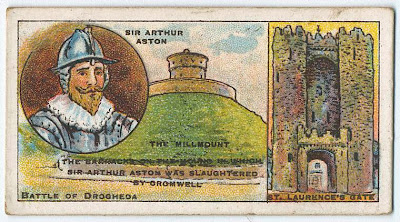 As the Parliamentarian soldiers made their way through the town, it was reported variously that either over one hundred Royalist soldiers, or soldiers and citizens, fled to the Catholic St. Peter's Church on Peter St. (it's foundations were built over by the current St. Peters C.o.I.). The people inside were ordered to surrender and they would be spared but they refused, whereupon, Cromwell wrote later "I ordered the steeple of St. Peters' Church to be fired, when one of them was heard to say in the midst of the flames 'God damn me, God confound me; I burn, I burn." When the remaining 200 soldiers finally surrendered again Cromwell says "their officers were knocked on the head, and every tenth man of the soldiers killed, and the rest shipped to Barbadoes."

Whilst Cromwell gave no direct orders for the massacre of civilians, the same cannot be said for the Catholic clergy in the town. This was also a religious war as much as a political one, and orders were given that any Catholic priest or friar should be, to use Cromwell's phrase, "knocked on the head promiscuously". Tom Reilly's book "Cromwell at Drogheda" mentions an account by a Jesuit priest in Drogheda during the siege. In it he states that churches were pillaged and destroyed and townspeople massacred. He also mentions that when the Parliamentarian soldiers discovered two priests in hiding "they led them off in triumph, and accompanied by the tumultuous crowd, conducted them to the market-place...they tied both to stakes in the ground and pierced their bodies with shots till they expired". Another elderly priest was dragged from his bed by the soldiers and savagely beaten, dying from his injuries a few days later.

What happened at Drogheda was by all accounts a savage affair but it was meant to be a deterrent, to discourage future resistance from other towns. Indeed the neighbouring garrisons of Trim and Dundalk either surrendered or fled when they heard what fate had befallen Drogheda. The whole siege had a huge impact on British & Irish history as a whole as well as being an extremely gruesome part of the town's history.
Email ThisBlogThis!Share to TwitterShare to FacebookShare to Pinterest
Labels: Beaulieu House, Cromwell, gruesome, history, Millmount, St. Oliver Plunkett, St. Peter's Church, Tholsel