What’s On in the area for Bank Holiday Weekend

Table Quiz in McHugh’s The Venue


Register at St Fechin’s GAA Club, Beaulieu at 9.30am

Lunchtime Concert in the Tholsel


Register at Collon Community Hall at 10am

Battle of the Boyne Visitor Centre, Oldbridge 11am – 4.45pm

Please note that there is NO Living History Demonstration in Oldbridge on Saturday and the D Day Festival at the new Irish Military War Museum in Starinagh, Collon has been postponed until later this year.

Drogheda Museum Millmount is open Saturday 9.30am - 5.30pm and on Sunday and Monday 2pm - 5pm ( Last Tours 60 minutes before closing)


New Zealand author, Donald Offwood's, latest book Soldier to Settler, published by The Caxton Press, is  based loosely on the life and times of his great great grandfather, Patrick Murtagh, from Carrickbaggot near Drogheda, and it contains many mentions of life in the Drogheda area during the Famine period including, Richmond Fort at Millmount,  Grendon's Founfry, Cairnes Brewery, Drogheda Gas Works, Drogheda Chemical Manure Company, Drogheda Steampacket Company and the Linen Hall, all feature. It also covers various events in the town's history including Oliver Cromwell's sacking of Drogheda, the Battle of the Boyne, the building of the barracks at Miillmount and the arrival of three Ottoman Empire ships in 1847.


This dramatized  novel follows Patrick Murtagh, who as a poor Irish boy joins the British Army in 1820. After serving in India, he is discharged into the famines of the 1940s in search of work in Drogheda.

As a man of 'good character' he is able escape the famine to re-join the Army in 1847 and come to New Zealand with his family and with the offer of his own cottage and schooling for his children, as a Fencible Corp soldier. In exchange for guarding Auckland for seven years and for the first time in his life he will own something he cannot carry - his own land.

After seven years service he is discharged and in 1860 moves south to Green Island, Dunedin, with his family, to buy his own small farm and become an Otago Pionee


The  author Donald Offwood, who has published 12 books, researched the subject by travelling to Drogheda where he sought  the assistance of Drogheda Musem Millmount and Clogherhead historian James Stanley.


This weekend the 4th Boyne Valley Walking Festival kicks off this with the Drogheda Steps Challenge. This is the first time an organised group walk takes on this very challenging walk which takes in all of Drogheda's flights of steps, old and new.
.
This year there are 5 walks, with something for everyone.including walks on Saturday and Sunday with special once off permission from the various landowners

Thursday 29th May: Drogheda Steps Challenge in aid of St John’s Ambulance. This challenging walk is not for the faint hearted. 1200 steps over 10km around the town.


Friday 30th May: Get the Family out and walk the new Boyne Greenway in aid of Gary Kelly Cancer Support Centre. 10km. Meet at St Dominic’s Park , Drogheda at 6pm.
€5 donation appreciated.

Saturday 31st May:  Boyne to Coast, in conjunction with Ramblers Country Tracks. The longest walk at over 18km. This is the premier walk, mainly off road .Special once off permission to walk a very scenic area .Register at St Fechins GAA club, Beaulieu at 9.30am. €15 includes refreshments.

Sunday 1st June: New Mellifont. This walk is a 14km loop on the Cistercian Monks estate at Collon. Check out the huge variety of trees at this mainly woodland walk. Register at Collon Community Hall at 10 am. Special once off permission in a very peaceful location.

Speaker: Dr. Peader Slattery, whose family have run the renowned Slattery's photographic shop on Upper O'Connell St. for many years. 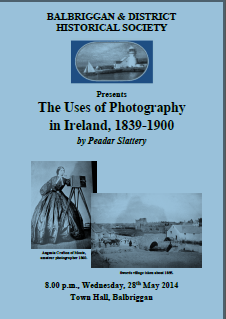 History is often, and necessarily, mediated to us. Someone writes that history choosing what we need to know and what we don’t. Only through personal intervention can we prevent our individual histories being lost. But where do we start?

Echoes of 1916 is attempting to create, in Louth, a large community action research project which seeks to empower individuals, young and old, to research their own personal background and try to find out where their own ancestors may have been in 1916. The project is inclusive and is not tied to the 1916 Rising in Ireland or indeed to being Irish. It may well be that your roots extend as far away as Africa, Europe or other parts of the world and these histories are equally as valid in the context of this project.

The project is delivered by Upstate Theatre Project in conjunction with Drogheda Local Voices.


This is a Major Community Research Project

NOT JUST A HISTORY PROJECT


The project is free of charge

Who should get involved?

Anyone who cares to begin to research their family history and lend their research to the project for artistic interpretation further down the line.

The initial workshops are designed from a historical research perspective (the art comes later in the project). Local historian Brendan Matthews and Conor McNamara of Notre Dame University will deliver the series giving background to the era and tips on how to begin to research. The intention is to first interest people in the idea of research and secondly to empower individuals to begin to research their own family histories by illustrating the initial stages of genealogical research particular to the period in question. There will also be online support.

People can join by emailing dmallon@upstate.ie - or by phoning the company at 041 9844227 and providing email address

The Hill of Ward

Title:  Hill of Ward: from earliest times to the present day.

Post-event:- Walkabout on the Hill (shuttle bus to Hill) and light refreshments in the hall courtesy of Comharcumann Ráth Chairn.


Lecture/Talk: Thursday 22nd May @ 8pm: The last of the Headforts - the decline of the Big House.

Today Saturday 17th May from 2 to 5pm: Garden Party organised by Friends of Collon Church at Collon House to raise funds for urgent repair to the roof of Collon Church of Ireland Church. Admission €15. Children free.

Tonight: Thursday 15th May @ 7pm - Book launch Of Other Days by Anthony Holten.

The book is an account of a rural childhood spent in post-World War II Ireland during the 1940's and 1950's.

Portrayed against the backdrop of Tara, Navan, and The Boyne Valley, the author relates his recollections of growing up in County Meath, Ireland during an age of relative innocence and simplicity.

Comprised of 85 tales of varying lengths, the many different aspects of life in the Irish countryside during these years are explored in detail, reflecting an Ireland which now, just over half a century later in the new millennium, has well and truly vanished.

Dean Jonathan Swift and his times

Lecture to follow on Dean Jonathan Swift and his times, with reference to his connection with Quilca near Virginia.

Upstate Theatre Project in conjunction with Drogheda Local Voices Oral History Project will launch a new project Echoes of 1916 on Thursday next, May 15th in the Governor's House, Millmount at 8pm.

The Echoes programme will initiate a community research project to investigate the whereabouts of people’s ancestors in 1916. It is hoped that this open-ended question will result in the exploration of a variety of family histories and in turn present a broad portrait of the community in 1916. As well as people with ancestors in Ireland during 1916, it is also hoped that new communities in Drogheda will join the programme and present their own personal histories from the period, no matter which country they hail from.

The project will host a number of local experts, historian Brendan Matthews and Sean Corcoran of Drogheda Museum Millmount and Drogheda Local Voices, alongside Notre Dame’s Conor McNamara and Upstate Theatre Project’s Chairman, Dr. Matthew Stout. While the initial phase of the project will have a distinctly historical research edge, Upstate will later work to develop the material using the latest mobile technology, turning it into an artistic experience.

What happened in Ireland between 1912 and 1922 happened in a global context, a period that was a very turbulent time in human history. Through this project we hope to begin to uncover this period of commemoration and explore the humanity of our shared histories.

The launch night on May 15th is an opportunity for people to learn more about the project and register for future workshops in the programme. The programme will be intergenerational in nature, and everyone from 15 to 115 is welcome to take part. Thanks to the PEACE III Programme, participation will be free, and no experience is necessary – just commitment and interest!

This project is delivered by Upstate Theatre Project and is supported by the European Union’s European Regional Development Fund, through the EU Programme for Peace and Reconciliation PEACE III Programme manage


Tonight: Friday 9th May @8.30pm as part of the Gilson Summer School there will be a talk on St Oliver Plunkett: His Life and Times.

Among the events already planned is a Symposium on the teaching of philosophy in Irish Primary Schools. The symposium will included a paper from a staff member of a school in Co. Cavan that has integrated Thinking Time into their 3rd and 4th classes’ curriculum.


The JYO are performing in the Barbican Centre, Drogheda on Saturday 03 May at 5pm as part of the Drogheda Arts Festival.

The JYO will be joined on the day by guest soloist, Jennifer Murphy. Jennifer is a rising young violinist currently a scholarship student at the Royal Academy of Music in London and the JYO are delighted that she is travelling from London to take part in the concert.

Formed in 2011 the Julianstown Youth Orchestra includes players from Louth, Meath and Dublin and has fast become one of the biggest youth orchestras in Ireland with over 100 members playing a wide range of instruments.

Led by leading conductor, Fergus Sheil and run by a committed team of parents, this progressive orchestra has had the wonderful opportunity of working with composer Brian Irvine, received mentorship from the RTE Symphony and Concert Orchestras and performed with international violinist Tasmin Little. They have performed in the National Concert Hall and the Convention Centre Dublin and won an award at the IAYO Festival in 2013


Tickets to the concert cost 10 euro for adults and children are free. They can be purchased at the door.