In June 1936 a group of civically-minded citizens organised a week long Fete in order to raise money for a new organ for St. Peter's Church. It was in honour of the deceased Monsignor Patrick Segrave, Archdeacon of Armagh (1849 - 1934) who had worked tirelessly to upgrade St. Peter's Church but never saw the installation of "a organ worth of the Catholic town of Drogheda". Monsignor Segrave oversaw the completion and decoration of St. Peters, "universally admitted to be one of the finest parish churches in the country" and was there for its two greatest achievements; the consecration of the church in 1914 & the enshrinement of the relic of St. Oliver Plunkett in 1921.

The Pontana (the Latin form of the Irish name for Drogheda) Fete was set in The O'Raghaillaighs GAA grounds and had a a very wide range of events with something indeed for everyone. The main programme of activites was distinct from the five stalls set up around the stadium, each of which provided their own entertainment. The variety on offer is a testament to the organizers of the festival and would attract crowds of people today. 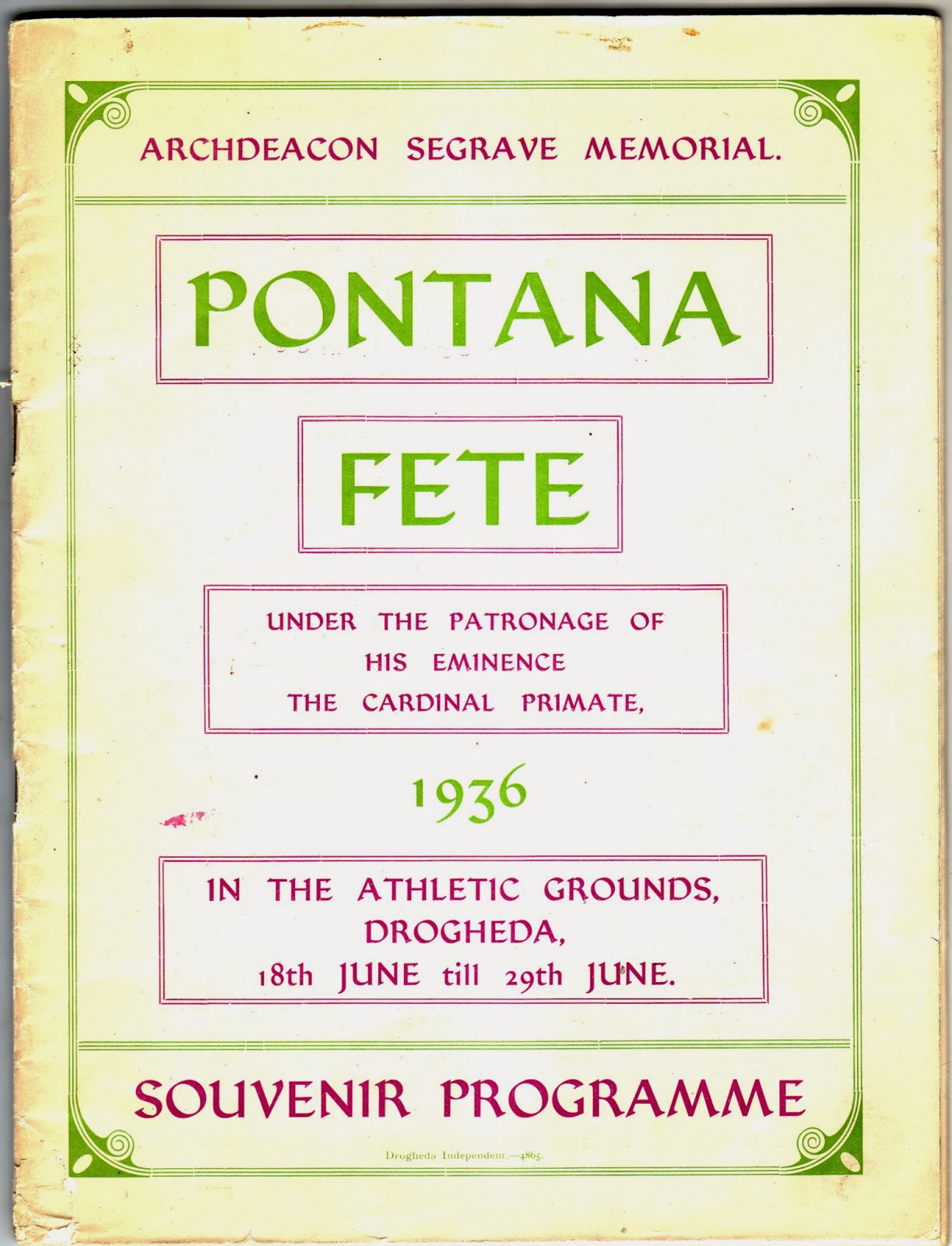 The individual stalls, all with religious names and individual colours such as St. Vincents (blue & gold), Immaculata stall (pink & white), and Blessed Oliver's Stall (red & purple), ran their own lineups of fun and games. Some went all out with chutes and helter-skelters, obstacle golf, clay-pigeon shooting competitions, treasure hunts both on foot, in cars & on bicycles, ceilidhes, fancy-dress parades, and five a side football matches. The old fairground favourites of hoop-la, shooting galleries, fortune telling, donkey rides, wheel of fortune were present along with games of chance like 'penny on the squares', three card trick, and dice games.

There were numerous refreshments available for the punters at the stalls such as teas, minerals, dips, ice cream, cigarettes and even an ice salon.

Some of the amusements listed have fallen out of common use in Ireland, such as 'Aunt Sally', 'Nail in the Block' and 'Bagatelle'. Aunt Sally is an English pub game, which is still played in Oxfordshire, England where it originated. It consisted of a wooden ball, called a dolly - originally a figurine manikin painted to look like 'Aunt Sally' balanced on an iron spike. The aim was to knock Sally off her perch without hitting the iron.
Bagatelle was effectively an early version of a pinball machine, whilst Nail in the Block is fairly self-descriptive - players take turns driving a nail into a block of wood with the wedge end of a hammer.


Prizes were handed out on the evening of the 29th June with the Drogheda and Artane Bands bringing to a close what must have been a wonderful 12 days of festivities.