Not all soldiers who fought in the American Civil War were men. There are over 400 documented cases of women disguising themselves as men and fighting on both sides of the War. The case of Albert D. J. Cashier (born Jennie Irene Hodgers) is one the most famous because he continued to live as a man after the war and was not discovered until a few years before his death. 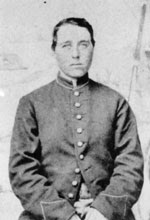 Hodgers was born on Dec 25th 1843 in Clogherhead, Co. Louth, Ireland. Not much is known about how he moved to the United States or why he enlisted in the army as the only account available was given by Hodgers in 1913 when he was suffering from dementia. According to later investigation by the administrator of his estate, he was the child of Sallie and Patrick Hodgers.

This much is certain - on August 6th 1862, Hodgers, a resident of Belvidere, Illinois, enlisted in the 95th Illinois Infantry under the name Albert Cashier and was assigned to Company G. The regiment was part of the Army of Tennessee under the command of Ulysses S. Grant and fought in approximately forty engagements, including the siege at Vicksburg, the Red River Campaign, the Battle of Nashville and the battles at Kennesaw Mountain and Jonesborough, Georgia. Described by a fellow soldier as 'the smallest man in the company', Cashier resembled many Irishmen of the time. During his enrollment he was described as having a light complexion, blue eyes and auburn hair. He preferred to be alone and no-one thought anything of a quiet soldier seeking privacy for bathing and dressing. This was common, so he continued to go unnoticed.

By all accounts, Cashier was a good soldier and he gained distinction during his army career. Even well after the war his comrades remembered the slight soldier as a brave fighter, admired for heroic actions and undertaking dangerous assignments yet never receiving a scratch. There is an account that in May 1853 Private Cashier participated in the Siege of Vicksburg, during which time he was captured whilst performing a reconnaissance mission. He escaped by wrestling a gun away from a Confederate and was chased on foot, narrowly making it back to Union lines. Cashier served a full three-year enlistment with the regiment until they were disbanded in August 1865, and he was awarded a full soldier's pension.

After the war, Cashier returned to Belvidere and worked as a labourer for a while, before eventually settling in Saunemin Illinois. He continued his life as man, and held many different jobs, including farmhand, church janitor, cemetery worker and street lamplighter. Cashier voted in elections (something which women were forbidden to do at the time) and continued to collect his state pension. His choice to remain living as a man allowed him a life of freedom that he never would have had, had he returned to living as Jennie Hodgers. As Albert he was respected as a Civil War veteran, and could receive a pension, earn twice as much money as a woman, be free to work and live as he chose rather than be dependent on a husband, have a bank account and even vote. His decision meant his freedom.

In November of 1910 Cashier was hit by a car and broke his leg, and it was then his secret was discovered. A doctor realized Cashier's true identity in the hospital, and moved by Albert's pleas decided to maintain his confidence. On May 5th 1911 Albert was moved to the Soldier and Sailors Home in Quincy, Illinois. While the staff were aware of Cashier's double life, they never broke his confidence. His leg never recovered however and he remained a resident of the Home until March of 1913. His mental and physical state had begun to deteriorate by then and due to the onset of dementia he was transferred to a state hospital for the insane. It was there that staff discovered his sex and the story was leaked to the newspapers, and soon everyone knew that Private Albert Cashier had been a woman in disguise.

The government then decided to charge Cashier with defrauding the government in order to receive a pension. An investigation was launched but luckily Cashier's former comrades, though initially suprised by the revelation, rallied round and testified that this was not Jennie Hodgers, but Albert Cashier, a small but brave soldier. Man or woman, this soldier had indeed shown bravery on numerous dangerous missions. In the end Albert did receive veteran status but unfortunately his treatment in the state hospital was much less befitting a veteran. The staff, after discovering Cashier's secret, forced him to wear female clothing, greatly affecting his mental state. At 67 years old, frail and unaccustomed to walking in women's clothing, he tripped and fell and broke his hip. Unfortunately, he never recovered from the injury and passed away on October 10, 1915. He was buried in his full uniform which he had kept intact all those years and his headstone was inscribed with his male identity and military service. The house where he lived still survives in Saunemin, and in the 1970's a second headstone was added in the local cemetery to commemorate both of the Irishwoman's names; Jennie Hodgers, the girl who emigrated to the United States, and Albert Cashier, the brave veteran of the Civil War. 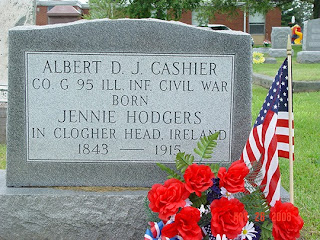