The Cottage Hospital is an institution that has served the community of Drogheda well for over 107 years. It's distinctive Edwardian red brick buildings are still handsome looking and they provide daily, care services for the elderly citizens of the town amongst others (unless the HSE have their way).

The hospital was initially opened on 14th December 1909 by Countess Aberdeen with just 12 beds at first as a result of the efforts of two sisters known locally as the Misses Smith of Greenhills, who were its first secretaries, and who raised the money for its erection and maintenance. The concept of a 'cottage hospital' was a small rural building with only a few beds but the advantages were that the local physician knew their patients and their case histories better than at a county hospital, there were facilities to deal with emergencies more immediately than transferring to a voluntary or county hospital, and the level of care meant a journey to a county hospital was unnecessary.

Drogheda's Cottage Hospital had, like all worthy causes, a number of wealthy patrons; namely The Viscountess Gormanston and Lady Rathdonnell, whilst the President of the establishment was Lady Bellew. The rules of the hospital stated clearly that it was for all members of the community should they need it, and was equipped to deal with both out-patients and day-patients and had free beds and also paying patients.
Some of the rules stated:

"2. The Hospital shall be strictly non-sectarian, and the clergy and accredited ministers of all denominations shall be at liberty to visit the hospital at all times to minister to the spiritual wants of patients requiring their attendance.

4. The hospital is intended to be partially self-supporting, but shall contain a certain number of free beds, to be supported by annual subscription.

16. The definition of a paying patient is one who pays £2 0s. od. or upwards per week to the hospital. Those paying from 7s. per week upwards are defined as contributory patients. Children under twelve are half price.

17. No person suffering from infectious or contagious disorders, (unless the funds admit of a completely separate building for their use), or any chronic disease, shall be admitted unless in the last case the Medical Officers shall be of the opinion that the person would be benefited by hospital treatment. No patient shall remain in the hospital more than six weeks without the special permission of the Executive Committee. Every requisite of the patient (except personal clothing and medicine, 1s. per week being charged for medicine) will be provided in the hospital, and patients may not receive food or drink from any other source witout the sanction of the Matron."


In the first year of opening the hospital had a debt of £55 19s. 1d. but due to support given by way of a jumble sale, a fete and a sports day that was wiped out, with "the building being thoroughly repainted inside and out, two new beds, carpets and new instruments provided". During it's first three years in operation the number of patients rose from 80 in 1908 to 240 by 1910. Amongst the various cases treated were appendicitis, peritonitis, pneumonia, blood poisoning, anemia and fractures, with 9 births and 3 deaths being recorded. The staff in 1909/10 consisted of Dr. Redmond, consulting physician and president of the Royal College of Physicians, Dr. Charles Maunsell, consulting surgeon, Drs. Byrne, Hunt and Tallan, visiting surgeons, a matron and nurses.

There was a large list of subscribers to the Cottage, with the founders the Misses Smith top of the list. A number of wealthy landowners, businessmen and gentry contributed, such as Colonel Coddington, H. St. George Osbourne, A. B. Cairnes, Lady Gormanston and Lord and Lady Bellew. Businesses also subscribed like the Drogheda & Castlebellingham Breweries, the Yorkshire & Lancashire Railways and the directors of the Boyne Mills. There were also a large number of gifts donated to the hospital such as magazines, food, books, cots and mattresses. 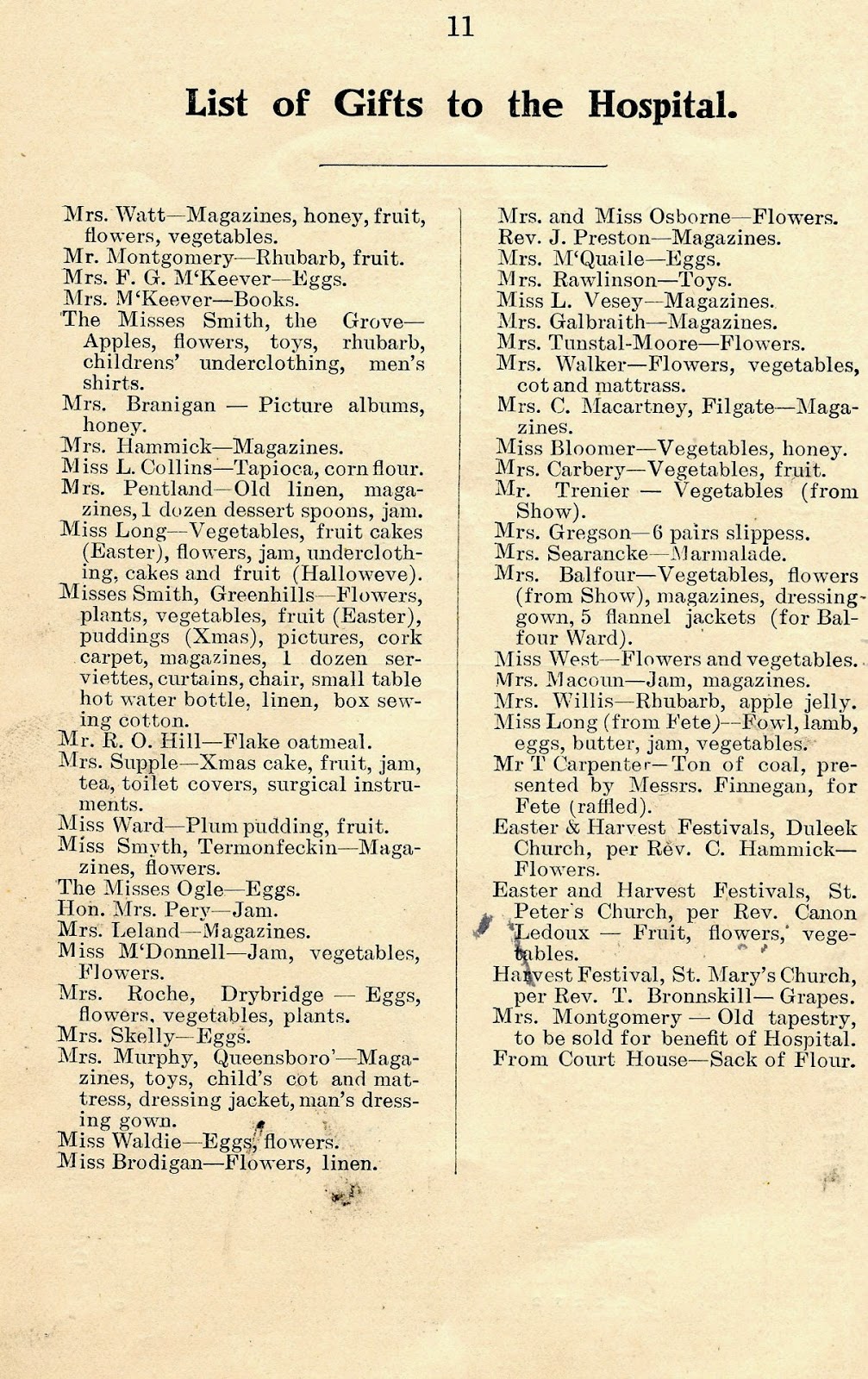 A brass plaque erected in the hall reads "This hospital stands as witness to the love and zeal of the Misses Smith of Greenhills, by whose efforts chiefly, the money for its erection and maintenance was raised and in particular, to the devotion of Miss Sidney Smith and Miss Rosa Smith who for fifteen years acted as secretaries 1908 - 1932". The Cottage Hospital is now managed by the HSE as a convalescent/respite centre for the elderly, and also houses the Doctor on Call centre and Ambulance Centre for the immediate area. Despite the best efforts of the HSE to close down the facility by removing beds and considering downgrading the hospital, this local institution still stands and thanks to the efforts of local groups like 'Save Drogheda Cottage Hospital' hopefully will continue to provide care for the people of Drogheda for years to come.