"Drogheda's the Place for Me"

This article by Evelyn Kirwan was originally published in the Old Drogheda Society Journal 1998:

"The song was written by Larry Branigan who was born in 1904. He was brought up in the Oulster Lane and Scarlet Street area and after doing his Leaving Certificate with the Christian Brothers, he commenced work in the offices of Dublin Port and Docks. He often described arriving in Dublin in 1922, wearing knickerbockers as the shells rained down on the Four Courts during the Civil War.

Larry only made one continental trip - to Paris in 1936, where he resisted efforts to recruit him for the war against Franco in Spain. He was widely read and an enthusiastic Gaelic scholar. He travelled to Dublin every morning until his retirement in 1966 and was once described by the Drogheda Independent as Ireland's "greatest commuter".

Married in 1957 to Kathleen McGrane, Larry moved to the Cord Road. He was an avid walker, swimmer and cyclist and could be seen for many years wandering the byroads of Louth and Meath, accompanied by his friend Tom McConnon, late of Patrick Street.

Larry has a sweet tenor voice and would sing at the drop of a hat. He wrote many songs. His "Drogheda's the Place for Me" is a love song to his hometown. He sang it at every opportunity. Not many people listened but he would be happy to know that the song is still there after his death which occurred in 1990.


"Drogheda's the Place for Me"

1
Tell me you know the way
Beamore or sweet Baltray
Down by the Boyne, its pleasant there
Hawthorn and Roses and sweet fragrant air.
Maybe we'll go to Slane
Or round by Rosnaree
In by the Bolies, it's always fair
Drogheda's the place for me

2
Drogheda's a pleasant town
Where streets go up and down
High Lane and Low Lane and Duleek Gate
St. Peter's, St. Mary's, just don't be late
Out by dear old Stameen and round by Mornington
Laytown or Butlin's its all the same
Drogheda's the place for me

3
You hear the joybells ring, you hear the Tholsel chime
Down by the Rampart, we have a park
Out by the Obelisk we'll have a laugh
Where Billy crossed the Boyne
Newgrange is there to see
Dublin or Belfast or Cork by the Lee
Drogheda's the place for me

4
Now lately there came to town
Pope John Paul of great reknown
At Kilineer he bowed a knee
Prayed we'd be free from hostility
People from North and South, greeted with one great shout
John Paul looked up and "Be God" says he
Drogheda's the place for me


(with acknowledgement to Patrick Branigan, nephew) 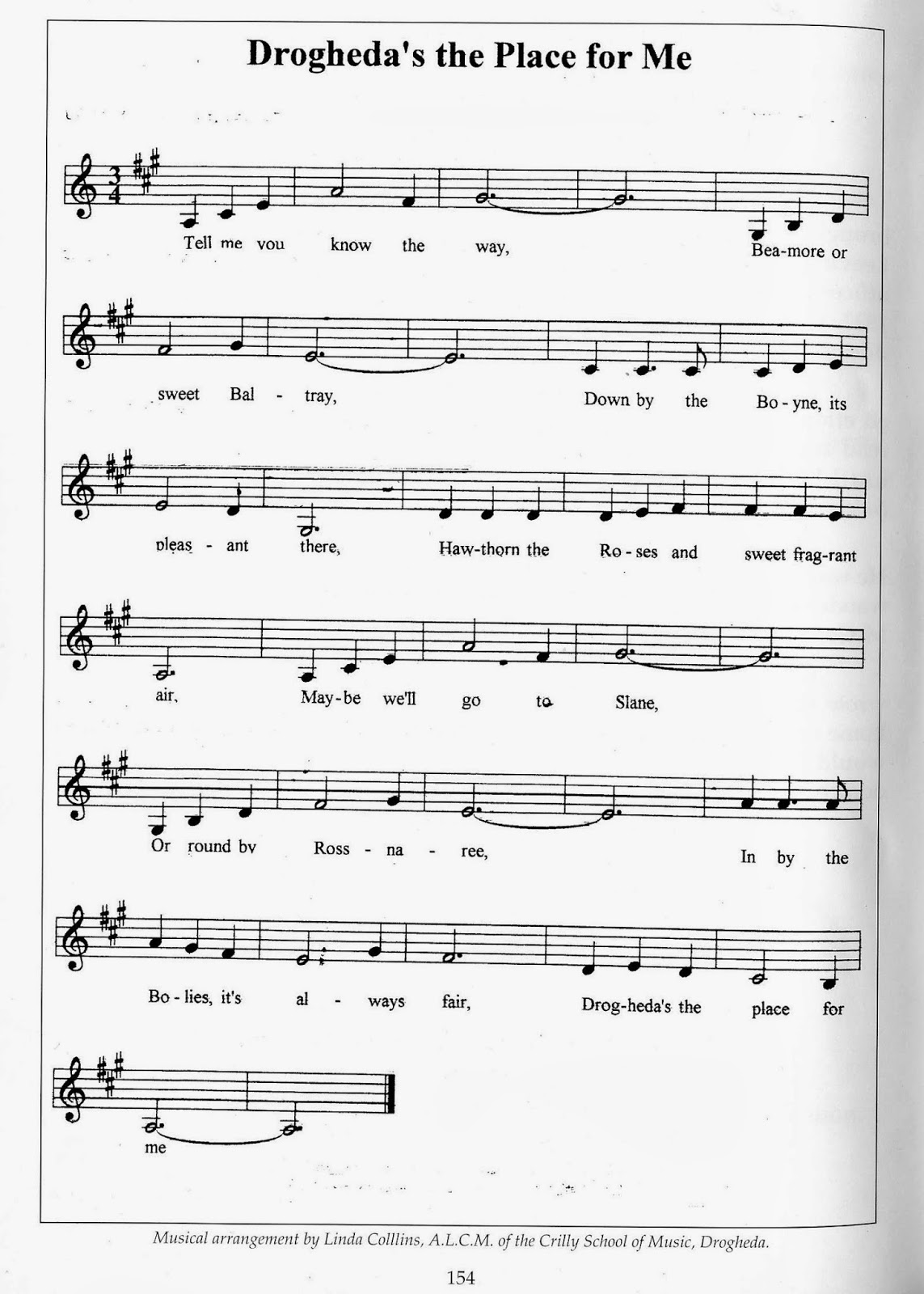