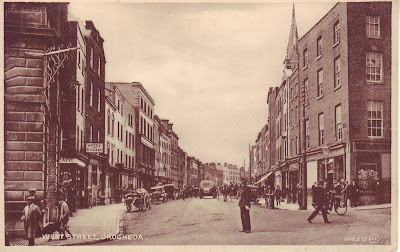 Following on from our sporting post, the very same An Tóstal guide offers a look at Drogheda at the time and certainly offers an optimistic view of life in 1953 in the article "Life in Old and Modern Drogheda - A Contrast":

"Coming to more recent times, letters and records of pre-Famine days tell of a busy town and crowded streets, men on horseback, four-wheeled carts, and the sailing ships passing in and out of the River Boyne on their paths of commerce. The town then housed more than 20,000 inhabitants, but in a much smaller area than the present population enjoys. Thousands were herder together in lanes and courts at the back of the main streets, in tenements and cellars, with surroundings dark and drear and sanitation of the most primitive type. Working hours were long, leaving scant time for leisure or play. The rewards of labour were small and scarcely sufficient for the necessities of life. The gulf between the working classes and the upper classes were very wide indeed.

The Drogheda of today has changed in many ways and mostly for the better. The town is prosperous and progressive. The establishment of several large new industries brought an enlarged labour market, and most of the youth of Drogheda can, if they so desire, find employment at home. The population is now about 16,000, an increase of 3,200 in the last twenty-five years, and is steadily rising. The housing of the people has been improved out of all knowledge. Open spaces outside the limits of the old town have been transformed into residential areas where our people live in a comfort undreamed of by their forefathers.

The ordinary citizen in this democratic age can elect local representatives who are prepared to give their time and energy to promoting the general welfare of all sections of the Community. Working hours are shorter and pay much better than formerly. There is more time for leisure and, though much of it is still spent unprofitably, signs are not wanting that many people are beginning to put their spare hours to good use. Most of the new houses have small gardens attached where the raising of vegetables and flowers gives gainful and pleasurable occupation. Evening classes in the Technical School are availed of to increase educational attainments and to attain proficiency in the arts and crafts. Local societies for the promotion of the drama, instrumental and choral music etc are steadily increasing. An excellent public library gives access to the pleasures of reading in all its branches, cultural, educational and recreational. A new Art Gallery and Museum containing the nucleus of a permanent collection has been established; periodic exhibitions of the works of well-known artists are held. A fine public park and the provision of playing grounds for children in the new housing schemes are also much appreciated amenities. Outdoor sports and games of all kinds cater for the physical well-being of the populace. Dancing and whist drives are popular forms of amusement and a couple of splendidly equipped cinemas offer occasional hours of light relief from the daily grind. 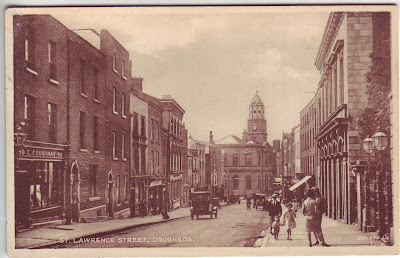 Modern advances in science have in a large way revolutionised the lives of the people. The provision of electric power has added immeasurably to the comfort of town and rural life, and to the productivity of our factories. Formerly very few people travelled more than a few miles from their places of habitation unless compelled by the stress of war or similar impetus. The advent of the railroad, the bicycle, the motor car and the 'bus has completely changed this. The workman can now live farther from his work, his bicycle or the bus takes him there easily and speedily. Clogherhead and Laytown are within easy reach on a summer evening after the day's work. A day in Dublin is now no novelty to a Drogheda man, such visits are a regular part of his life. The motorist can range much further afield. Day tours to places of interest are common place and most of our people have progressed beyond the Boyne Valley to the Hills of Donegal or the Glens of Antrim. The town is easily accessible to the rural population, their children can take more advanced educational courses in the larger town schools. Many Drogheda people live at home and travel daily to Dublin to work or to attend University.

In many other ways also the lot of the ordinary person has been improved with the passage of time. Educational facilities are now provided for all children. State and locally administered schemes attend to the health of both the adult and school going population. Drogheda is singularly fortunate in having excellent hospital accommodation, which caters not only for its own citizens but for the people for many miles around. Most of our industrial firms have excellent superannuation schemes for the workers with accompanying medical and health services. Poverty is very much diminished and the ministrations of the St. Vincent De Paul Society and other charitable organisations do much to mitigate its hardships. Undoubtedly in its social services Drogheda is both up to date and progressive.

Yes, Drogheda today is a prosperous, expanding town, its way of life is Christian and edifying; no wonder its people are in the main healthy, pleasant and cheerful."

A somewhat rose-tinted view undoubtedly; what is interesting is to compare then with now and count the differences, most noticeably in the employment and population figures!