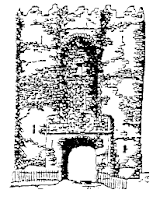 Old Drogheda Society
The Old Drogheda Society will be hosting a free lunchtime lecture entitled John Boyle O’Reilly and the Fenian Escape from Fremantle Gaol on next Thursday June 18th in Drogheda Tourist Office in the Tholsel, West Street .

Brendan Woods has worked in Fremantle Gaol and is recognised as an authority on the subject and his account of this famous escape will be well worth hearing.  The lecture starts at 1.00 pm.
Drogheda Museum Millmount