In a small alley off Dyer Street in Drogheda was a community of ten red-bricked terraced houses that ran down to the river's edge. The two rows of houses lined a small cobbled courtyard and was known as Boyne Place. Families such as Farrelly, Kiernan, Moran, Lynch, Tully, Murray and Byrne (who managed to squeeze a family of 12 into the small house in 1911) lived there until the houses were closed up in 1952. The families were subsequently re-housed in Yellowbatter and Bothar Brugha. The Place had one communal toilet for the ten houses, and fresh water had to be carried from a pump located further up the street at the Haymarket (in the area of where the old Boxing Club used to be).

From the census of 1901/1911, the occupations of many of the inhabitants were labourers, shop assistants and factory workers. By the late 1920's/early 1930's there was a special kind of trade being carried out in Boyne Place. The following extract is from a guide to "Drogheda & it's Industries" in 1932 and provides a wonderful insight into a small and long-forgotten craft industry for which Drogheda was once well known.

"In the last house in Boyne Place, an alley off Dyer Street, Drogheda, there is a little workshop belonging to Mr. Michael Burke, and it is from here the Drogheda hand-made toy industry is controlled, and has grown from a small beginning to a successful and progressive business. Up to a hundred hand-carved toys a week are turned out by Mr. Burke, and these are of a great variety, beauty and workmanship; and include dolls' houses of every size, dolls' furniture, railway engines, wheelbarrows and Noah's Arks, as well as the animals therefor.

The workmanship in every case combines beauty with durability, while the animals and birds for the Ark make an exceptionally fine display, and would add lustre to any toyshop window, provincial or metropolitan. There are mountainous elephants, sinuous tigers, long-necked giraffes, striped zebras, brilliantly plumed peacocks, and all the other folk who went afloat with Noah, and which delight the hearts of the youngsters.


It is regrettable that more Drogheda children are not amused by such toys, as there must be thousands of toys bought each year in the town, and if this demand could be diverted to the home-produced ones, it would be found necessary for more than one local trader to stock them, and the reaction on the industry would be beneficial. How many Drogheda people know that a shop has been opened in Dublin where Mr. Burke's toys are selling rapidly, and that they can also be bought in the leading toy-shops of many English towns? This is due to the enterprise of Mrs. V. Lentaigne of Termonfeckin, who has fostered this little industry since Mr. Burke's ability and skill were brought to her notice some years ago, when she arranged for an exhibition of his work at the Spring Show where Drogheda toys were first brought before the public eye." 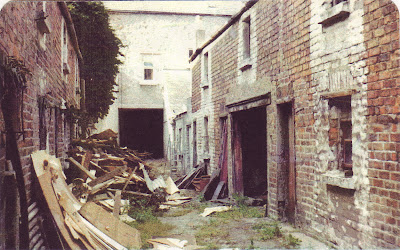 The article goes on to state of the importance of people buying locally produced products "by insisting upon their children being supplied with Drogheda-made toys" instead of mass-produced ones (a problem which has come full circle with people nowadays again being encouraged to buy local)
. Mr. Burke's toys were for sale in Schwers shop, West Street, Drogheda and in The Country Shop on Stephen's Green, Dublin.

Sadly, today, the local toy-making industry is long forgotten and Michael Burke's crafted products are no more; just like Boyne Place itself which was demolished in August 1982 (it stood on the site where Kennedy Cycles is today in Dyer St.), both consigned to memory.
Email ThisBlogThis!Share to TwitterShare to FacebookShare to Pinterest
Labels: Boyne Place, Drogheda, Micheal Burke, toy-making