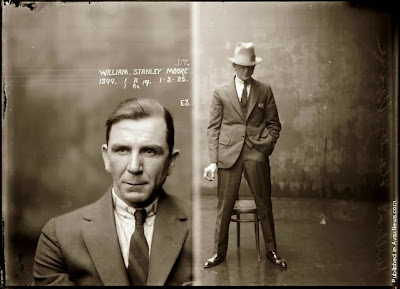 Today's post is a bit of a departure from local history and goings-on but it's a fascinating one nonetheless.

When a flood deluged an old Sydney warehouse in the 1980's, The Historic House Trust (Sydney, Australia) shifted around four tonnes of boxes, cartons and crates of old Kodak negatives. What they found on examination was an extraordinary visual archive of crime photos dating from 1912 to 1960. Con-men, itinerants, prostitutes, gangsters, all caught in the flash lamp of bygone police investigations; along with hundreds of crime scene, accident scene and surveillance photographs. There are plenty of Irish names which feature in the mugshots.

The negatives came without documentation so many were a complete mystery. However, by cross-referencing the names and dates on the mug shots with police records and newspaper stories of the day, curator of the City of Shadows Photographic exhibition Peter Doyle has brought their stories to life. These photo's have been exhibited briefly before in Sydney but are back by popular demand.


Link to the 'City of Shadows' exhibition, Sydney, Australia:  http://www.hht.net.au/discover/highlights/insites/city_of_shadows