Welcome home the descendants of the Drogheda Fenians of 1867!

This year as part of The Gathering celebration, whose emphasis is to welcome home the many Irish and their descendants that have emigrated over the years, Drogheda Museum has chosen to welcome back the descendants of the Drogheda Fenians. This year marks the 146th anniversary of the failed Fenian Uprising of 1867, after which many of the local Fenian members were forced to flee the country.

"The Fenians" was the popular name for a mass political movement called The Fenian Brotherhood or the Irish Republican Brotherhood (IRB) which flourished in Ireland and among the Irish in America & Britain in the second half of the 19th century. They advocated an independent Ireland with votes for all and a nationalisation of agricultural land, and also the complete separation of Church and State, which meant its members included both Protestant and Catholic. In Drogheda they included some of the best and brightest of the population, and the fact that many of them had to leave after 1867 was a great loss of life to the town.

Many of the Drogheda Fenians who fled subsequently played prominent roles in the lives of their adopted countries - mainly in the U.S.A, Canada, Australia and Britain. Many of their descendants have contacted the museum over the years trying to trace their genealogies and we have been able to piece together the dramatic life stories of their ancestors. This year we invite the descendants of the Drogheda Fenians, their extended families and friends, and indeed anyone who is interested, to a series of events in Drogheda from Thursday 4th July to Sunday 14th July 2013.


Our week-long programme kicks off on Thursday 4th July at 6.30pm in Drogheda Museum Millmount with a brand new exhibition - Who Were the Drogheda Fenians? - focusing on the local branch of the movement, and examining their social history and the times they lived in.


On Sun 7th July at 3pm there is an excellent historical walk taking place to Monknewtown Cemetery - The Col. Leonard Banner Trail - lead by community historian Brendan Matthews, there will be a parade of the Drogheda Trade & Guild Banners up to Monknewtown Cemetery where Col. Leonard is buried. Assembly will be in the car park of the Tourists Rest pub, Rossin, on the main Drogheda to Slane road ("Dolly Mitchell's") with descendants of Col. Leonard and William Reynolds present. 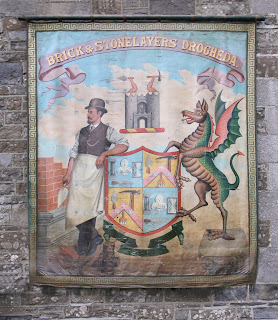 Afterwards at 4pm there will be an exhibition of the Banners and a celebration of their artist William Reynolds in the Tourists Rest function room along with music from local trad group Eitleán.

Never fear, there will be a bus available to shuttle people to the Tourists Rest and back into Drogheda so people can enjoy a drink or two whilst enjoying the music. The bus departs from the Lourdes Church at 2.15pm SHARP and also from Marian Park at 2.30pm SHARP and returns at 6.15pm in the evening. The fare for the bus is 5 euro.


Col. Patrick Leonard from Tullyallen was a major Fenian leader on both sides of the Atlantic and after his death in 1873 an annual commemoration attracted crowds of many thousands from all over Ireland and Britain to his memorial in Monknewtown cemetery. The Col. Leonard Fife & Drum Band was set up in his memory, and this later became the Drogheda Brass & Reed Band. His cousin, the artist William Reynolds, painted the famous Drogheda Trade & Guild Banners and designed the memorial.