From Ian Kenneally's blog on John Boyle O'Reilly, the details of the newly discovered letter from 1870.

If Cashman or any of them knows anything about Miss Woodman I wish they would write it or tell you what it is. Was the child born? That’s the principal thing I want to know. 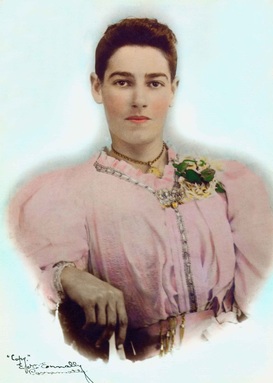 There are no validated images of Jessie Woodman when when she was a young woman. The above photo is of Catherine Pickersgill, Jessie's daughter. Catherine supposedly bore a striking resemblance to her mother (photo provided by Denise Moore, great-great grand daughter of Jessie Woodman).

During September 2015, a new exhibition opened in Millmount Museum, Drogheda. The exhibition titled 'Shall the punishment fall on the girl alone' was co-curated by Ian Kenneally and Sean Corcoran. It tells of a recently discovered letter, written by John Boyle O'Reilly, in which he reveals some extraordinary facts about his relationship with Jessie Woodman. This letter, entombed in a drawer for one-hundred and forty-five years, was recently rediscovered in San Francisco. John Boyle O’Reilly lived an epic life but in the exhibition we see him at his most vulnerable, amid a time of intense personal turmoil. The exhibition runs until the end of October 2015.

The fourteen months that O'Reilly spent in Western Australia have often dominated accounts of his life. Yet, that time, from January 1868 to March 1869, has always been a source of myths, misconceptions, and unanswered questions. During that time the twenty-four year old John fell in love with a woman named Jessie Woodman, the daughter of the head warden in O’Reilly’s convict camp.

Rumours regarding this relationship were first made public by Michael Davitt during the 1890s in his book, Life and Progress in Australasia. Martin Carroll, an American historian, was the next person to examine this relationship in the early 1950s. Carroll interviewed descendants of Bunbury residents who knew O’Reilly in the 1860s and concluded that O'Reilly and Woodman did have an affair. The fact of a relationship was finally confirmed in 1989 by the Australian archivist Gillian O’Mara. During that year a slim notebook was given to the Battye Library in Perth which was signed ‘By John Boyle O’Reilly, 13 March sixty eight, in the bush near Bunbury’. O’Mara then deciphered the shorthand script through which O’Reilly had scrawled messages across the pages of the book. It was a log which O’Reilly kept from March onwards while in the convict depot. Unfortunately, it was not a diary and does not contain much personal information, being mostly poems that O’Reilly wrote while he was in Western Australia. Yet, it does establish that O’Reilly was involved with a local girl and contains the admissions that; ‘I am in love up to my ears’ and ‘It would take a saint to give her up’. That their relationship was physical was confirmed by his gripe that ‘I wish she was not so fond of kissing’.

The newly discovered letter confirms the long-held suspicion that Jessie Woodman became pregnant during her relationship with O'Reilly. The exhibition details the contents of the letter and its ramifications for our understanding of O'Reilly. We know that John attempted suicide at the end of 1868 but the letter also hints that Jessie made an attempt on her life, perhaps as part of a pact. Jessie has long remained a somewhat shadowy figure, her part in the story obscured by the fame which later enveloped O'Reilly. This exhibition provides a wealth of new information on Jessie and traces what happened to her in later years and what happened to her baby. Being an unmarried mother in nineteenth-century Australia would have marked Jessie as, to use the language of the time, ‘unfit’, ‘dissolute’, and of ‘dangerous character’. Not only could her pregnancy have resulted in social disgrace and marginalisation but there was also the possibility that the child could have been removed form her care. In March 1869, Jessie married a local man named George Pickersgill, a figure with whom she does not seem to have had a prior relationship. As O'Reilly suggests in the letter, this was done to save her name and that of her family.

The discovery of this letter has become part of the John Boyle O’Reilly story. It provides us with a glimpse into a relationship which has remained veiled for over a century. More than that, the letter provides us with a starting point from which we can look at O’Reilly’s life and work in the context of this new knowledge. Perhaps Jessie Woodman haunted his thoughts for the rest of his days. How did Jessie Woodman deal with what happened? We may never know but there are indications, although no more than hints, that her marriage to Pickersgill was unhappy. Was she burdened with a life and a marriage she never desired? We can never know what scars were left upon O’Reilly’s psyche by his imprisonment and his enforced exile from Ireland. Through his own hand he almost lost his life in Western Australia. But he had escaped and grasped freedom to start his life again. Did that confrontation with his own mortality drive him onwards to achieve all that he achieved? Questions remain but the answers are worth pursuing since such research helps us to better understand our past and our present. At present a number of researchers are working together to uncover more facts about O'Reilly, Woodman, and the world they lived in. Over one hundred and twenty five years after his death, John Boyle O’Reilly retains his ability to unite people across the globe.