Lecture ~ Drogheda And The Easter Rising

There will be an interesting look at the Drogheda input into the 1916 Rising, on Monday February 1st at 7.30pm in the Barbican Centre, William Street.

The first talk will be by Mary Gallagher a decendent of 1916 signatory, Eamonn Ceannt, who will speak on  Eamonn Ceannt - The Drogheda Connection. Eamonn's father an RIC officer was stationed here for a period and his sons attended Drogheda CBS, before moving to Ardee.

The second talk will be by Liam Reilly of Drogheda Museum Millmount, Drogheda men's involvement in the Rising. Liam will talk about the local men who took part in the Rising, those who meet up on Easter Sunday to take part only to be told that it had been called off, and about the men arrested in Drogheda after the Rising.

This is an open lecture and everyone is welcome.

This lecture is organised by the Dundalk and District Old IRA Commemoration Committee.

The Somme: What Actually Happened?

No admission charge and no booking required.
...

The Somme Offensive was one of the bloodiest battles in history, costing the lives of more than 1.5 million men, many of then members of the 36th (Ulster) Division, and later soldiers of the 16th (Irish) Division.

In Ireland the focus has usually been on the battle’s commemoration (and by whom) but what about the battle itself? How did it fit into the wider strategy of the war?
What does it tell us about the nature of war at that time and in particular on its effect on the Irish involved?

Please do not hesitate to contact me if you require any additional details. Kind Regards, Liz Coffey, Media and Communications. Tel: + 353 87 68 46557
E-mail: elizamcoffey@gmail.com
Twitter: @Elizamcoffey 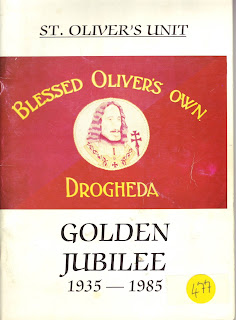